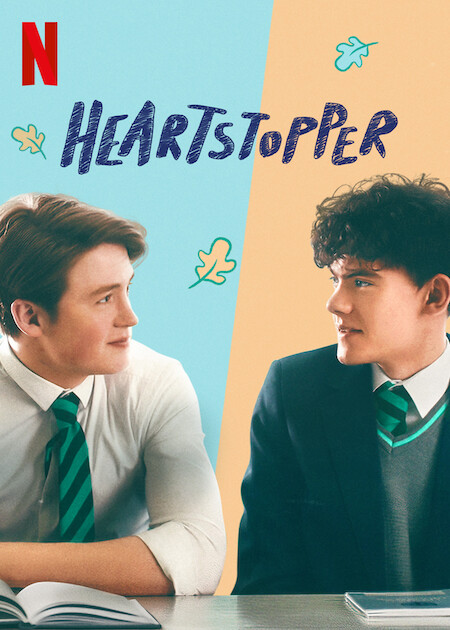 Heartstopper: the show that took the internet by storm. Since the debut of its first season on April 22nd, it has earned an 100% rating on Rotten Tomatoes and received rave reviews from critics. It is based on the webcomic (also published as graphic novels) by Alice Oseman featuring the beloved characters of Nick and Charlie. The webcomic has been viewed by over 50 million people to date. Fans of the comic knew what to expect when watching the show, as most of the events are kept true to the comic version, but were still left feeling satisfied. Seeing the illustrations brought to life on the screen adds a whole different layer of depth, especially being able to hear the dialogue said out loud. Newcomers to the show were wowed by the unexpected raw emotion and engaging storyline of the story.

Nick, played by Kit Connor, and Charlie, played by Joe Locke, are two teenagers that go to school together in England. They are placed in the same form (which means class, for Americans), and the two quickly become friends. Charlie is out at school as gay and has been relentlessly bullied because of his sexuality. When he and Nick meet, Charlie is seeing Ben, a popular boy who is exploring his sexuality but hiding his relationship with Charlie from the rest of the school. Nick is the captain of the rugby team but is feeling pressures from his friends to act a certain way. Sometimes, he feels he doesn’t fit in with them. Nick and Charlie’s friendship grows and intensifies, as they find out their feelings might be outside the realm of platonic.

I would rate this show a 9/10. I read the webcomic (which is still being updated!) before watching the show and admired how beautifully they translated the comic’s events to the big screen. Most characters were kept the same, with the addition of Charlie’s friend Isaac, and Imogen, whose love interest is Nick. The cast had lots of diversity and LGBTQ+ rep. In the comics, Elle is a transgender girl who moves from the school Nick and Charlie attend to the adjoining girls’ school. Heartstopper cast a transgender girl (Yasmin Finney) to play this character, which is very important. Often times, cis-het actors play in LGBTQ+ roles. The film industry will use queer characters for entertainment or brownie points without supporting LGBTQ+ actors. The main cast of characters—Nick, Charlie, Tao, Elle, Isaac, Darcy, and Tara—were as lovable as they were emotional. They portrayed the dramas of high school life incredibly; their expressions heartbreak, grief, depression, anxiety, and unconditional love were heart-wrenching. The show also employed an excellent use of color. During a party scene, colorful, flashing lights basked a couple in their glow while they kissed. The colors yellow and blue were shown next to each other repeatedly, symbolizing Nick and Charlie. Alice Oseman’s doodles are sporadically featured in the comic. Leaves flutter across the screen and cartoon hearts pop as characters fall in love.

I believe that this show gives hope to young queer people all over the world. Shows featuring LGBTQ+ characters often depict toxic relationships or end in the death of one of the main characters. Heartstopper shows that queer people can and should have happy endings. Fans, like me, are clamoring for a second season, one they hope is just as feel-good as the first.