What went down at the Super Bowl?

Here, we’ll take a look at what happened on Super Bowl LV and see if CB West’s predictions (and hopes) came true. 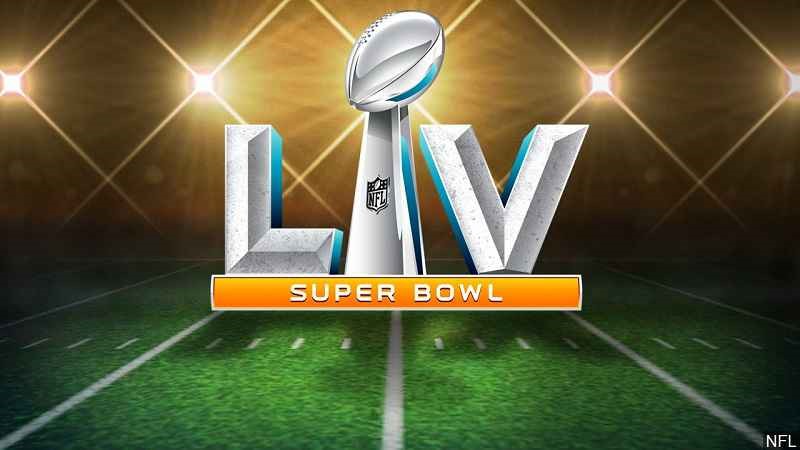 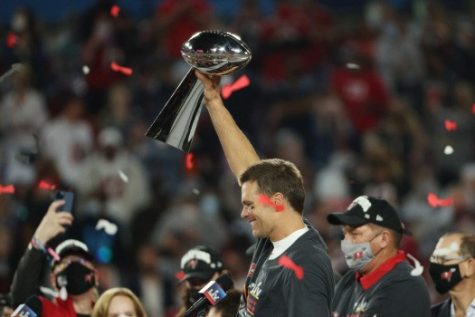 Firstly, if you didn’t watch the Super Bowl on February 7th and don’t already know what happened, the Tampa Bay Buccaneers demolished the Kansas City Chiefs 31 to 9. The Chiefs struggled to get their offense going from the start, which was supposed to be their key strength towards winning the game. Additionally, the Buccaneers showed us they could not only stop the Chiefs’ offense, but also put up some numbers of their own. Tom Brady has officially won his seventh Super Bowl ring, and along with his long-time Patriots teammate, Rob Gronkowski, a record was broken. Brady and Gronkowski now have the most ever playoff touchdowns as a passer-receiver combo. Overall, the Bucs simply outplayed and outsmarted the Chiefs.
How It Compares 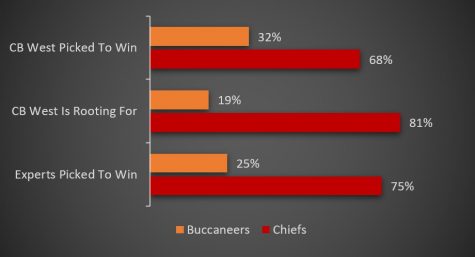 So, how does the game compare to what we thought would happen? The experts and CB West students alike both thought that the Chiefs would win. The graph is shown to the right for reference. Furthermore, the majority of CB West students were rooting for the Chiefs as well (sorry guys!). It looks like what most people thought, including the experts, turned out to be wrong. A few of my personal predictions, at least, ended up coming to fruition. I chose that the Buccaneers would win, though I never would have thought by so much. I even stated that it was practically a fact that it would be a tight, back-and-forth game—but it obviously wasn’t! All in all, Super Bowl LV probably surprised everyone watching, even those 32% of students that thought the Buccaneers would win.
How the Bucs Won 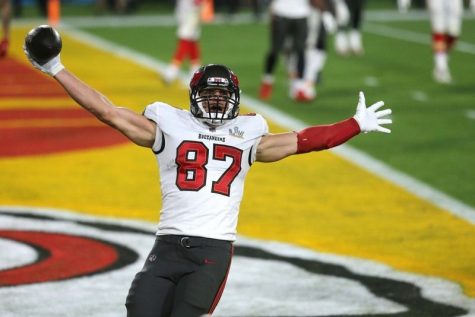 There were three major factors that helped the Buccaneers take home the Lombardi Trophy this year. The first one was that they put on an amazing offensive performance: their two running backs, Leonard Fournette and Ronald Jones, totaled for 196 yards. Brady threw for 201 yards to his many options—Gronkowski, Evans, and Brate all played amazing games. It was clear that the Chiefs’ defense was no match for the Bucs’ offense on the day of the Super Bowl.

The second big factor was the Chiefs’ inability to get their offense moving. Patrick Mahomes, who was expected to bring the Chiefs to victory, threw two interceptions and not a single touchdown. In fact, the Chiefs scored no touchdowns the entire game. Devin White and the rest of the Bucs’ defense, as predicted, was a big part in this, too. Not only that, but the Chiefs’ offensive line just couldn’t stop the defense from getting to Mahomes! It seemed like every other play the Buccaneers had Mahomes having to dodge and run away. Finally, the last, and maybe most surprising factor in how the Bucs won, was how many penalties the Chiefs made. The Buccaneers, in total, got 120 yards from the Chiefs’ many penalties, which is more than the length of the whole field!
Take-Away
So, overall, the Buccaneers played a very strong game and took advantage of the Chiefs’ lackluster offense. Brady and the Bucs overcame all doubts and surprised everyone by overtaking the Chiefs and winning Super Bowl LV. Their offense, combined with the Chiefs’ poor offense and many penalties, led the Bucs to absolutely crush the Chiefs 31-9. Good game, folks, and for those rooting for the Chiefs, maybe next year!

—————————————————————
Super Bowl 2021 (previous article)
Super Bowl LV is right around the corner, with the Kansas City Chiefs facing off against the Tampa Bay Buccaneers. Who’s going to take home this year’s trophy? Here’s what the experts say—and what CB West’s opinion is.
Overview

This year’s Super Bowl will be held on February 7th (this Sunday) at 6:40 pm EST. in Tampa Bay, Florida. The Kansas City Chiefs and QB Patrick Mahomes will face off against Tom Brady and the Tampa Bay Buccaneers. The Chiefs, 14-2 in the regular season, have appeared to be cruising so far in the playoffs—readily defeating both the Ravens and Bills, two powerful teams. However, don’t write off the Buccaneers right away; they’ve been hot as well. 11-5 in the regular season, they began the playoffs in the wild card games but since then achieved victory over both the Saints and Packers. Although the Chiefs have a powerhouse offense, the Buccaneers may be able to counter with their strong defense. In short, Super Bowl LV is going to be one for the ages. Here’s what CB West predicted (and is rooting for).

CB West Versus the Experts 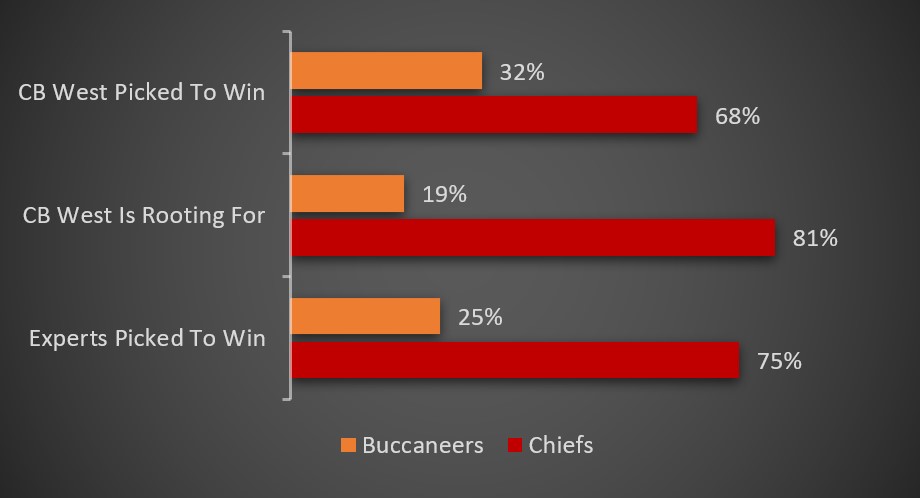 Analysis: What You Need to Know 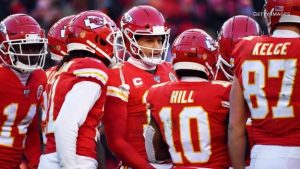 The major reason that most think the Chiefs will win is due to their extremely strong offense. They’ve got several key juggernauts—Patrick Mahomes, Travis Kelce, and Tyreek Hill, to name the big ones—that allow their offense to score 415.8 yards per game, the most by any team in the NFL. Not only that, but Kansas City won the Super Bowl last year 31-20 against the 49ers.

On the other hand, the Buccaneers also have a very strong offense, even having a 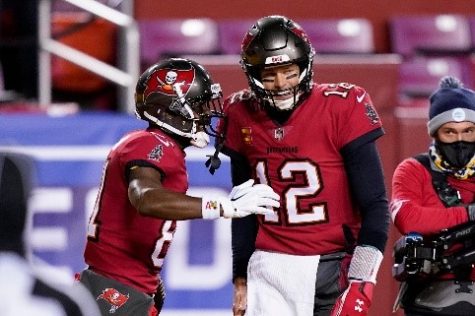 higher points per game than the Chiefs! Their big names to look out for in the Super Bowl include Tom Brady, Mike Evans, and Chris Godwin. The main strength of the Buccaneers, however, will be their defense. One big name, Devin White, and the rest of their squad are in general a better defense than the Chiefs’ defense. In addition, the game will be played in the Buccaneers stadium, which is the first time a team playing in the Super Bowl also hosted it. This could have an effect to boost the Buccaneers’ morale; playing on your own turf can often help teams play better. 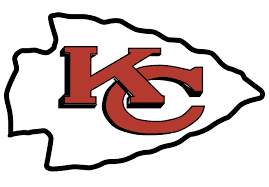 So… can the Chiefs’ seemingly unstoppable offense actually overcome the Buccaneers’ superior defense, like both CB West and the experts say will happen? Well, in their previous meeting earlier in the season, the Chiefs did indeed win—27 to 24. For the Chiefs to win again in the Super Bowl, they’ll need to meet everyone’s expectations for their offense and score at least about 27 points. In their best-case scenario, the Chiefs need to steadily score a high amount of points each quarter and strip the Buccaneers’ opportunity to make a comeback. A major factor on the Bucs’ defense that the Chiefs need to overcome is Devin White. Several of the Chiefs’ offensive linemen are hurt right now, which could be a detriment against Devin White and the rest of Tampa’s impressive defense. 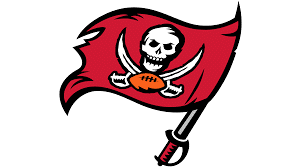 For the Buccaneers to win, they’ll need to make sure they keep up with the Chiefs’ offense. Their focus should be to not go down by too much in the first half so that they can easily come back later in the game. For their defense, they’ll need to find a strategy to cover Tyreek Hill better than their previous meeting against the Chiefs, where he scored three touchdowns and over 200 yards. 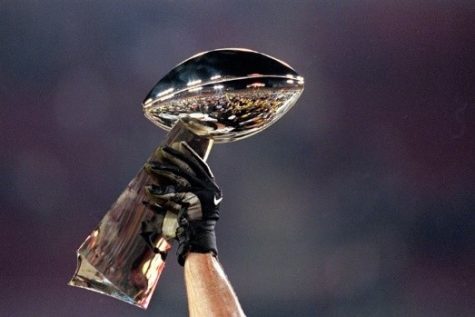 …you can expect a VERY tight game with a close, neck-and-neck battle for the trophy. While the Chiefs are expected to win about 28 to 26, I personally think the Buccaneers have a higher chance of winning. Everybody else can only talk about how powerful the Chiefs’ offense is, but many may forget that the Buccaneers have an almost equally powerful offense. Paired with their stronger defense, the Buccaneers are set up to win Super Bowl LV and exploit Kansas City’s weaker defense. So, who do you think? Can the Chiefs meet expectations, or will the Buccaneers win as the underdog? No matter what happens, this is going to be a close one!